New York, New York sigh…it’s a must see city that has been idolised in the old black and white movies, smoky jazz cellar music and photography pioneers. So it’s no wonder it is top of many a traveller’s list!

But wish lists aside, it can also be found on some less welcoming lists including ‘the most expensive cities in the world’. A bite of this big apple does not come cheap so you’ll need to keep your wits about you when looking for accommodation.

Gallery Hopping in Chelsea
A few hundred art galleries are squeezed into the area between 20th and 28th street that will keep even the most dedicated culture vultures happy. It’s a buzzing neighbourhood with a European quality about the place with cobbled streets and historic buildings. For a touch of time-out, the recently developed High Line is a mile-and-a-half long derelict elevated railway that has been converted in to a green space and promises sanctuary from the noisy New York City streetscene. 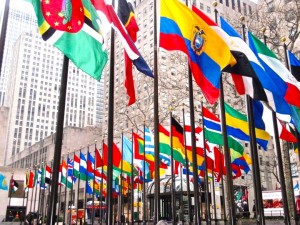 here to stay…art lovers will appreciate the creative touches at the Chelsea Start Hotel. Their budget and superior rooms boast new beds, TVs with DVD players and internet. The likes of Penn Station and the quirky Chelsea bar scene are all within 5 minutes’ walk.

Dancing in the Meatpacking District
To be within stumbling distance of the trendy New York City nightlife scene, the Meatpacking District is good place to base yourself. Warehouses and other industrial buildings, once notorious for slaughter houses and seedy prostitute corners have long since been turned into bars and clubs. There are new venues opening every week but Tenjune and Kiss & Fly are firm favourites.

Where to stay…Complete with air-conditioning, mini fridge and basic self-catering facilities, Hotel 309 is a few minutes from the Meatpacking District hub and just one block from the subway for easy access to other New York sights. Peace and Quiet near Central Park
Escape the tourist throng of Times Square and head north along Broadway. Here you are straddled by the jogger-friendly Riverside Park and Central Park, both green and leafy havens which will be a welcome break from the New York City high-rise skyline. The Cathedral Church of St John the Divine is an awe-inspiring building worth a visit and Columbia University keeps the atmosphere pleasantly vibrant with students coming and going from snug coffee houses. Yet hop on the tube and you can be in New York City downtown in just a few minutes.

Where to stay…offering both superior and budget rooms with either en suite or shared bathrooms, Morningside Inn also provides self-catering and laundry facilities.