5 Awesome and Weird Events in Spain 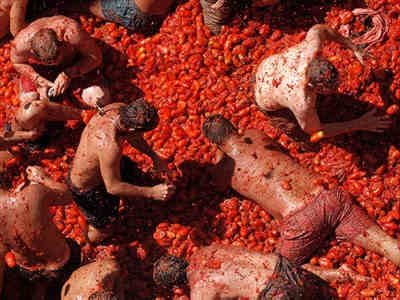 Goat Tossing Festival (January – Manganeses de la Polvorosa)
An event banned by officials and fought by various animal rights groups that still takes place! Annually, on the fourth Sunday in January, locals gather together for this festival in honor of St Vincent de Paul. It is said that a young man ties up one of the goats in the village and takes it to the top of the local Church belfry. He tosses the goat out and it falls 50 feet where it’s supposed to be caught by locals holding up sheets.
Insane! 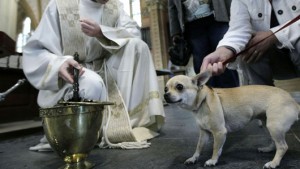 St Anthony Procession – Bless Your Pets? (January – Barcelona)
Whether you’re staying in Barcelona apartments or just visiting during this event, you may be surprised to see a lot of locals out with their beloved pets. Annually, on January 17th, thousands of people bring their pets to churches throughout the city to be blessed. There’s also many parades and ceremonies on this day in honor of St Anthony. 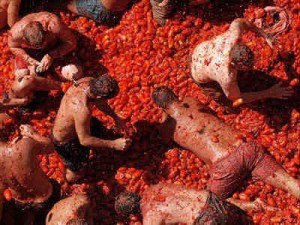 This intense event is top on my bucket list. On the last Wednesday of August every year, thousands of locals and tourists throw tomatoes at each other in honor of the Virgin Mary and St. Louis Bertrand. How wicked-cool does that sound? Over 100 tons of tomatoes are dumped into the streets for throwing. The ladies are expected to wear white and men are supposed to go shirtless (yum!). If you’re caught wearing a shirt you will inevitably have it ripped off.

El Colacho – Baby Jumping (Castrillo de Murcia)
Held at the feast of Corpus Christi, this festival involves all babies born within the previous twelve months laying on a mattress and the men of this village dress up as devils and jump over them. There are often injuries (but this is usually the adults, not the infants). Personally, I wouldn’t want grown men jumping over my new born child, but the locals believe it rids the babies of original sin (similar to a baptism).

Fiesta de Santa Marta de Ribarteme  – Resurrection (Las Nieves)
If you’ve suffered a new death experience in the previous year, you’re welcome to come celebrate resurrection in Spain. This event involves attending Mass in celebration of Saint Marta de Ribarteme, the Patron Saint of resurrection. It also involves people carrying coffins or being carried in a coffin. Although it sounds eerie, there are fireworks, and who doesn’t love fireworks?

Events are a great way to integrate yourself into another culture. Some of them seem odd to us, yet they are an annual part of locals lives. Imagine being in one of the apartments in Barcelona and watching people walk to church with their pets? Or strolling down the streets of Manganeses de la Polvorosa to witness a goat being thrown out a window? Personally, of all these events, La Tomatina is the one that has made it to the top of my bucket list.