A Guide to Yosemite Firefall 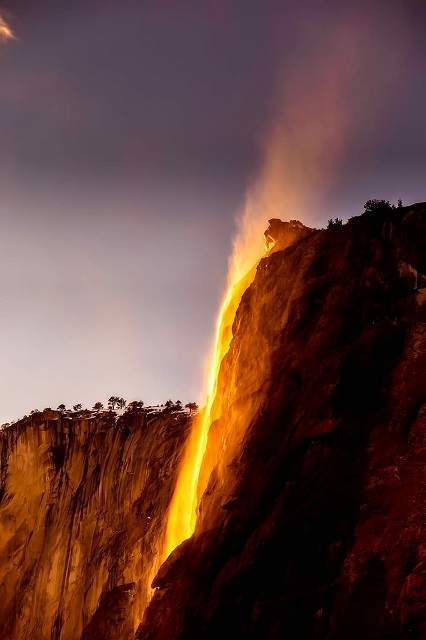 Travelers around the world like to gather in the Yosemite Valley to experience the surreal natural fire fall at Horsetail Fall. Why? It’s because if the right conditions are met, the sunlight will pass through the silver waters. It turns the waterfall’s color to molten orange as if it’s not water but hot lava. If you, too, are planning to witness this awe-inspiring natural phenomenon first-hand, read on. Because in this article, we will inform you about some important things about Yosemite Firefall.

How did the Yosemite Firefall get its present name?

This Firefall at Glacier point came into being from a literal fire falling from the Glacier Point’s edge. FYI, The reason why the fall is called what it’s called today has a pretty interesting history. In the year 1872, the Glacier Point Hotel owners made a memorable spectacle. They pushed a real bonfire off a cliff’s edge here. The bonfire coming down seemed like a waterfall made out of light to people looking from below. This spectacle was repeated and stopped many times throughout the next couple of years. And, by the mid-1900s, it was so well-known that travelers came here just to witness the fire falling down the cliff.

However, in January 1968, George Hartzog – the National Park Service director – bunged this practice. He did it to guard the park’s natural marvels. But, unfortunately, the large number of visitors were crushing the grass. Plus, there was the risk of fire hazards. And with that, the tale of the original Yosemite Firefall came to an end.

But five years later, a skilled professional photographer named Galen Roswell made an accidental discovery. He found a new phenomenon that resembled the Firefall event. While driving, he saw a little waterfall that looked like molten orange lava during the sunset from atop El Capitan. So he jumped out of this car and took a photograph of that natural spectacle. That photograph was the first widely-circulated color image of this natural event at Yosemite Natural Park.

Now, as people still have the memory of the actual event at Glacier Point, they gave it its current moniker. It was because it was the natural version of the falling bonfire.

Surprisingly, the Horsetail Fall doesn’t catch people’s attention most of the year. While it has a striking drop of 650 meters, this little stream atop El Capitan lacks any massive volume. This shortcoming becomes clear when comparing Horsetail with other famous cataracts here, like Bridalveil. Also, as it is dependent on snowmelts and runoffs for sustenance, it fades away wholly during summers. However, its popularity skyrockets in the few weeks beginning in February. It is during this time that one can witness the once-in-a-lifetime natural spectacle. But as we mentioned earlier, whether or not you’d get to see it depends on certain factors. Here are those factors:

The ideal alignment of the sun, the fall, and the visitor

In mid to late February every year, the sun comes to a perfect position here. Thus, if you happen to be in the proper position, you will witness the magic. We will also talk about the best time and place to observe the natural effect a bit later.

The natural event won’t occur if the skies are not clear. Then, the position of the sun wouldn’t matter at all. If the cloud obstructs the sunrays during the crucial minutes of the evening, it’s over. That’s the reason why most people don’t come here if there’s a cloudy forecast. Nonetheless, if the clouds part a bit and let just enough sunlight pass through them, you might be able to witness the spectacle. And, as a bonus, you’d get pink clouds that could contribute to some stunning photographs.

Sufficient amount of water in the Horsetail

Even if there are clear skies and the sun is in the perfect place, they are not enough. For effect to materialize, there must be sufficient water in the cascade. But how could you get an idea of the water flow? Well, one way is to view the Yosemite Falls webcam. Also, it would be great if you could know about the weather forecast during that time.

The Horsetail would get a fantastic flow provided that there are certain factors at play. First, some snow has to be present on the ground to supply water for the cascade. Second, the day has to be sufficiently warm so that the snow melts and the water comes running down the cliff. If that’s not the case and the weather is a bit too cold, the ridge would still light up. You’d also see a thin stream of water coming down the cliff, reflecting the sunset. But unless there’s more water, you wouldn’t be capable of witnessing the molten fire stream.

The last half of February sees the astonishing spectacle for about 5-10 minutes before the sunset. Nevertheless, you got to spend a few hours minimum to reach the right place at the right time. Gone are the days of quickly finding a comfy spot to see and take a photograph of the said event. It has now become an international event. So, people from all over the world come here as early as possible and set up their tripods to achieve their desired angle. So, there’s a lot of competition over positions. Thus, it’s advised to go there in the late morning or early afternoon. That way, you’d have enough time to understand the parking conditions and find an ideal place to view the natural event.

Once you find your spot, spend some quality time relaxing and witnessing the molten stream. Also, you’d get to talk and socialize with the people around you.

Best place to view the Firefall

The most famous site to experience the effect is undoubtedly the El Capitan Picnic Area. That is what the Meyers’ website says too. Also, the El Capitan Picnic Area is closest to the Horsetail Fall and costs only $30 a week to enter. So, you’d get the best viewing experience possible. You can park your car at Yosemite Falls and walk about 1.5 miles to reach the picnic area. If there’s no space to park there, you’d have to park further away. But don’t worry; from there, you can take the free shuttle operating for a limited time. The parking/traffic restrictions begin from 12 pm-7 pm during that time. So, bear that in mind.

Now that you know about Yosemite Firefall, it’s time for you to go and witness the cosmic event yourself. We can assure you that you’d never forget this once-in-a-lifetime occurrence. Good luck!

The Firefall can happen anytime between October and February, provided that all the necessary conditions are fulfilled. However, the last half of February is ideal for viewing it.

In January 1968, the then National Park Service Director George Hartzog ordered the stopping of the event. It was done because of the trampling of meadows and the risks of fire hazards in the park.