On the Road Blenheim, New Zealand: Tequila, Boys and Some Delicious Pepper

BLOG4NZ – Helping support tourism the way we know how – BLOGGING!

In case you live under a rock – Christchurch (a city located on the South Island, New Zealand) has been torn from earthquakes. The first of which I was in New Zealand for. I was supposed to be in Christchurch the night they had their first quake, alas I was too drunk and sleepy to go. The same thing happened in South America when I was supposed to be in Chile. My conclusion from this is:

Anyways, back on topic. This post is about the good and bad I experienced while working in the smallest country town ever. I hope you enjoy it and I hope you go to New Zealand because it is seriously one of the most beautiful places I have ever been in the world… and I’ve seen my fare share of Countries. Not to mention, Kiwi’s are super friendly, give them hugs.

“This comes from the heart, which is close to your gut, which is where beer hangs out” – Montie Martin (my friend with a catchy name) 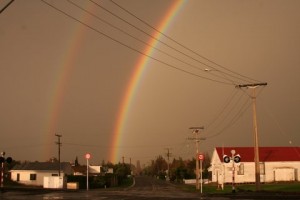 NZ is so awesome it shits rainbows! WOW!

The minute I arrived to this small town on the South Island, I wanted to leave. I freaked out when I realized I was stuck staying at a hotel in the middle of nowhere. The closest store was a 45 minute hike into town. Not horrible, but carrying groceries back was a bit of a challenge.
I moved there to work in the bar that was attached to a hotel (in exchange for accommodation – WOOFING). After getting to know my way around the bar and bonding with the locals I was prepared to stay for a while. How bad could it be? Working in a bar below my bedroom? (Not to mention, I was walking distance to numerous vineyards). 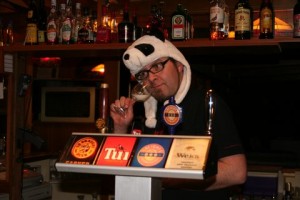 The boss man, hard at work!

When I finally started to become comfortable in my surroundings, I was shaken by the small town drama I witnessed. I always step back and watch others immense themselves in these sort of things… I never get involved, but somehow I kept getting dragged into it. I won’t get into any of the messy details though. I could write pages on some of the BS that went down in that bar, but out of respect for those I’ve made friends with and those who took me in and gave me work, I’ll concentrate on the positive things from my stay in Blenheim.

*Kiwi BBQ’s are awesome. But make you gain weight… unless you have that thing called ‘self control’. If so… F&%$ You!

*I realized I shouldn’t drink tequila so often, because it makes me kinda crazy. (Yeah I can’t believe how long it took me to find thatt out).

*I met an amazing new friend from Finland, Susy. She quickly became my new drinking buddy, but then left me after a few weeks. Stupid Sussy. 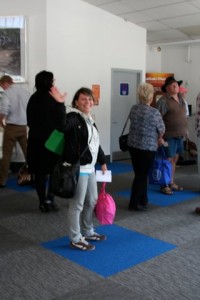 Sussy asshole face leaving me! The picture is kinda blurry because I was shaking my fist at her with anger.

*I adopted a dog for 3 months.

*I met Ben, who taught me a great deal about myself, spirituality and the universe.

*My friend from Mexico crashed his car into anelectric post. (He had been drinking and didn’t have a license or insurance). Bad Mexican!

*I had one of the best meals on my year RTW in Queenstown. It was duck, asparagus and sweet potato gnocchi. It was amazing. I would punch someone right now just to eat it again. Numnumnum….

*I slept in the back of a car under the phenomenal stars one night.

*I toured the South Island in under a week, then headed back to Blenheim for some quality time with my hommies. It became one of my ‘homes away from home’ and I missed it the minute I left.

Blenheim was a relaxing time other than being the crazy tequila girl. I dated 3 guys in Blenheim, within the span of 3 months, I know what your thinking, but I was making up for lost time. I gave up on boys for a few months prior to this. 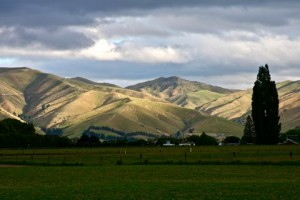 This was the view from my bathroom. I win at life.

Mom, Dad, you would have been proud… I didn’t fall down once! Alas, I accidentally lit a cigarette in a club and stole a pepper shaker from a cafe. It was really good pepper.