Around the World * Siem Reap, Cambodia: My Bus Blew Up?

Tuk Tuk drivers, Hookers and a Bus that Blew Up 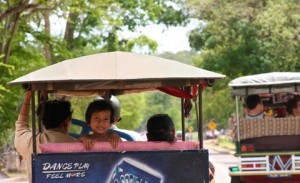 I woke up at eleven in Siem Reap after arriving late the night before. I went downstairs to look into seeing Angkor Wat that day, but realized I wouldn’t have enough time and ended up chatting up some other travellers. I met a boy, he liked beer, so we made friends for the rest of the day and late into the night.
Nothing like playing pool with some other travellers and a group of hookers to begin your stay in Siem Reap! (For the record, my new friends name was Drew).

Being frustrated from the amount of tuk tuk drivers stalking us at every corner, we decided to have a bit of fun with them.
Driver: “Lady you need tuk tuk?”
Me: “What? You mean you want to go in MY tuk tuk? You need a ride?”
Driver: “Huh? No, I drive you”
Me: “No, I drive you, my tuk tuk is right over there” (as I point at a random tuk tuk)
Driver: Pause… Blank stare.
“Haha, no, no… you need to go somewhere?”
Me: “No I will drive my tuk tuk to where I need to go, thanks though”
Driver: Silence

On the way home from the bar, with the addition of being offered many drugs, we were harassed my more  tuk tuk drivers.
Driver: “Lady you need tuk tuk?”
Me: “Only if I can drive”
Driver: “Okay, you pay me and you can drive”
Me: “Sweet!”
Drew: “You’re not driving the tuk tuk Lindsay, you’re too drunk”
Me: “Oh, okay. Can we get ice cream?”
Drew: “Yes Lindsay, we can get ice cream” 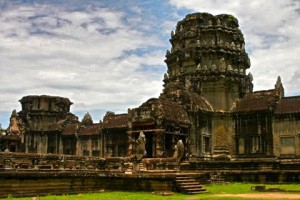 Two days later I made it to Angkor Wat. I bought a one day tour and managed to see most of the ruins in 4 hours. My attention span doesn’t last long on tours like this – I get ‘templed’ out quite quickly. It was sweltering hot that day and earlier I had debated riding bikes through the temples with my new friend Drew. Thankfully I didn’t because I might have died from drowning in my own sweat.

Later in the week, Drew decided he needed to buy a hat to block the sun. He picked out an awesome pink one after a long day of searching and bargaining. He wore it around for the rest of our days in Siem Reap, receiving many smiles and a few high fives.

Although he became my hero for his sweet-ass fashion style, he quickly went down a notch on my awesome radar when one night he thought it would be amusing to throw a giant grasshopper at me. I did not find it as funny. That hopper was the size of my FIST! (Well maybe not that big, but it was a rather large one). 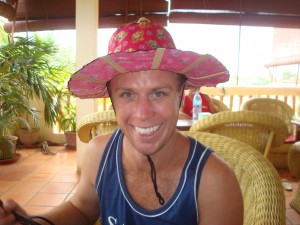 Everywhere Drew and I went, locals assumed we were married. When I was attempting to bargain for gifts for my nieces Drew had wondered away, only to come back to a shop owner telling him he should purchase gifts for his children. We often had to explain that we were not married. The reaction to this was:
Local: “Oh, so you are boyfriend/girlfriend”
Drew: “No, we just met 2 days ago”
Local: “Oh, then soon you marry?”
Drew: “Whaaa???”

I was sad I would have to leave my new buddy who I had so much fun with, but it was time to move on. I  bought my bus ticket to southern Laos and got up the next day at 4am for my pick up. A man showed up to my hostel in a tuk tuk around 5:30am (at this point I was fairly annoyed that I had been awake and had to wait so long – when I could have been sleeping. As I grabbed my bags to leave, he turned to me and said, “The bus, it blew up. Maybe tomorrow okay?”
I replied as anyone would, “Um, what? The bus blew up?”
“Yes, engine go KABOOM! Many people, 50 people, they are stranded”

So I guess the bus didn’t actually BLOW UP, the engine shot out. Drew made fun of me claiming he knew I wouldn’t get up that early and actually leave. So I explained to him that I DID, but my bus blew up and told him the story. He thought I was making it up.
An annoying occurrence, since I’m not a big morning person, but thankfully I wasn’t on that bus and stranded somewhere for hours. The next day I got up at the same time and hopped in what looked more like a mini van to begin my journey to south Laos.