The Drunkening: Guys Night Out, Tokyo 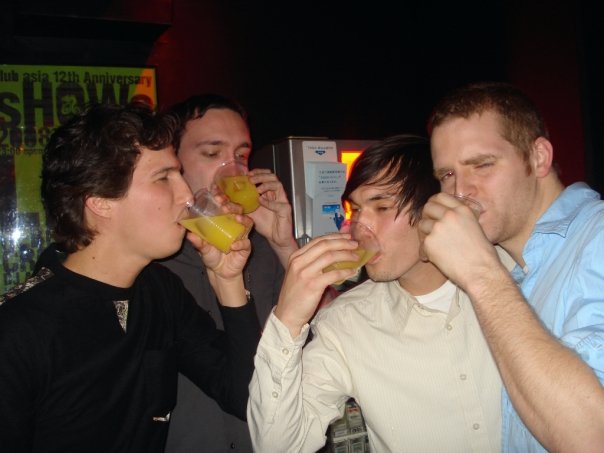 Find Out What Happens on a Drunk, Liquor Filled Boys Night Out in Tokyo, Japan 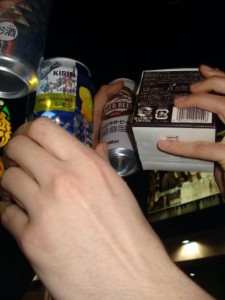 Off to a Rough Start

When I travel, I like to remember what I do so I can reflect and use it to better my life. The times that stand out the most in my mind are the really meaningful ones where I experience something profound that truly alters my worldview and encourages being passed on to others. No other moment as fully encompasses this feeling as Guys Night 2008TM when I went to town on my liver.

Living in Tokyo and working as an English teacher affords many occasions for debauchery and saucings, but on one particular night, the stars aligned and all was right with the world. Sadly, (or awesomely, as I prefer to remember it) this was not my messiest night, but no participant can deny it was one for the books.

It began with my roommate Paul and I splitting a litre bottle of shochu – Japanese distilled liquor – on our way out the door to meet the rest of the lads who were finishing up work. Our choice to go without the ladies was not one of sexism or manwhorishness, but rather to preserve our dignity when we inevitably did something stupid. As it would be a brutally long two minute train ride from Higashi Murayama to Tokorozawa, we opted to mix a drink in a Coke bottle each as to avoid seeming like complete boors. This would not be the pattern for the remainder of the night. 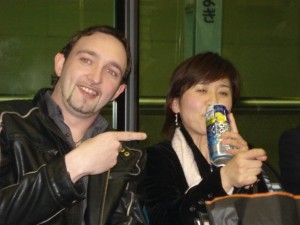 Tradition for English language teachers in Tokyo is to have station beers – as it is cheaper than bars and legal to drink on the street in Japan. So far be it for us to pass up on tradition, we also grabbed a beer to enjoy. David and Charlton soon joined, along with other man-children who had ‘responsibilities’ and ‘families’ who would not be joining us, but did have a beer at the station.

A few beers later, we departed for that mecca of all-night fun times, Shibuya. The drink of choice on the train, (as while you can drink on the trains, it is frowned upon… but uh… that’s half the fun?) was Chu-Hi – shochu alcohol and whatever fruit juice was in season at the time. The result is deliciousness and type two diabetes in a can. Paul was feeling charitable and offered his to a few random commuters – one even took him up and had a drink! She was a good sport and even thought about coming out too… kind of. Probably not. 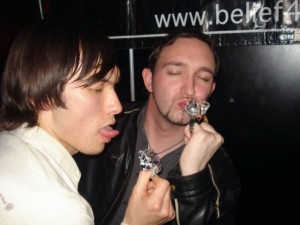 Uhh… I know as much as you do about this

Arriving in Shibuya necessitated more beer before making our way to some club… no idea which one, but I do know the cover was 2500 yen and came with two drinks. Meh. We stayed for our drinks, thought it sucked and then left to find a new one. Similar thing happened at the next one, but it was a much better place. Keep in mind, at this time, it was maybe 3 hours since Paul and I left home and we had consumed probably 4 litres of hard liquor and beer. Is that impressive? All I know is I was slammered.

Dancing and feeling amazing, I started to not feel so amazing. So I began the old lean and groove, which I think everyone can agree works wonders for battling the effects of alcohol. Except I decided the poison needed to get out the way it came in, so I discretely spewed onto the floor. Feeling better and knowing nobody saw, I went back over to where the guys were. That worked for about three minutes until the feeling came back again, so back out it came. And again. And again. Somehow, nobody really seemed to notice or care, aside from one girl who was watching the whole time. Instead of being repulsed or concerned, retching seemed to do it for her and she decided to grind with me. To say I was being taken advantage of, a defenseless foreigner at the mercy of a calculating Japanese girl, would be not far from the truth, as I was in no state to do anything (not to mention, was incredibly confused). 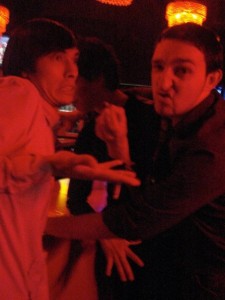 Thankfully, my friends noticed this and rescued me from her clutches before I could end up in her Hello Kitty lair. I have no idea where we went after this, but I do remember walking around looking for a McDonalds, as they are about the only thing still open at 4am while waiting for first train. I sought the cool texture of the table top while my friends consumed some fries and laughed at me. Out of pity, they bought me a bottle of water, which I downed and then spewed on the floor… because that’s how I roll.

Finally, it was first train time at around 6am, but I wasn’t done yet. All that moving and water drinking and now effort to make it to a train brought on another round or purging, but this one was in a pretty yellow colour! Bidding me adieu, Charlton gave me his McDonalds bag to store any future stomach surprises, which I immediately used, on the train. Suddenly feeling wetness on my jeans, I realized the bottom had given out. I was actually relieved that it was my stomach saying no more, rather than my bladder.

Sadly, there was no Guys Night 2: Even Drunkener, but my liver contracts a little every time I think of that night. It was glorious. 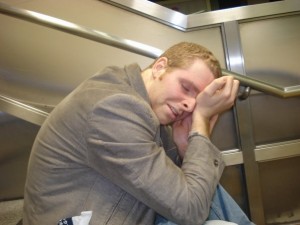