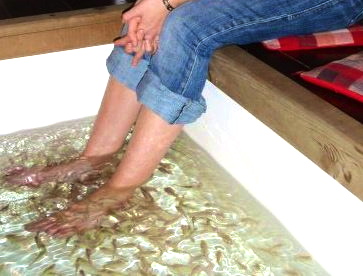 I know gift certificates are an impersonal gift, but so are bath sets and candles. I’m slightly disappointed that no one has ever given me a spa voucher for my birthday or Christmas. I’m definitely all about experiences over material goods, especially when those goods are useless things like a basket of random crackers and jam. I go to the spa to get my eyebrows waxed but I’ve never had the full, massage or treatment experience. Although, I’ve experienced the typical reason people head to the spa in Asia, which is to get an awesome massage. There are differences and similarities between what a Western spa offers and being pampered on the streets of South East Asia.

I think someone should buy me a spa treatment so that I can further investigate these comparisons *wink*. It’s pretty affordable for travelers to get a spa treatment in Asia even if they’re on a budget, whereas a lot of people refuse to spend their money on going to a spa in the Western world.

I had a few massages and pedicures while travelling around South East Asia and now that I am back in Canada, I try to convince my drunk friends to massage my shoulders or play with my hair. It usually doesn’t work, but you gotta loose some to win some right?