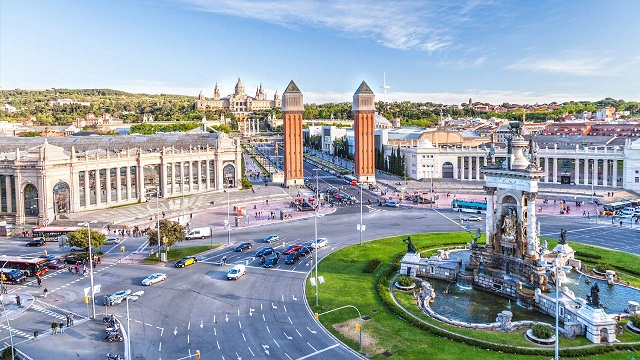 Spain plays a crucial part in world history, and many of its cities have ancient constructs still standing after more than 2000 years. For those that enjoy learning more about how life evolved on the planet, this location has a great deal to offer. From ancient cities established near 200 BC to grand churches created in the 1800s, Barcelona is amidst some of the most amazing creations of humanity.

Originally constructed in the early 14th century, the Santa Maria Del Pi is one of the smaller churches displaying Catalan Gothic architecture. Although it now has a more modern look and feel due to its restoration after a fire destroyed it in 1936, it still holds much of its original magnificence for a location that is roughly 700 years old.

In the late 19th and early 20th centuries, three houses were merged to form the Casa Batlló. It’s unusual architecture is just as fascinating on the inside as it is on the exterior of this amazing building. It’s fluidic-style of construction uses more rounded edges and corners when compared to traditional architecture and remains one of Barelona’s most interesting locations.

This is one of many different arcs seen throughout Europe as a means to commemorate special events. In this case, it was the 1888 Barcelona World Fair. The construction is of red brick and stone allowing it to withstand a great deal of time. It is one of the more famous locations in Barcelona.

Although this city is roughly 60 miles from Barcelona along the shoreline, it is still worth mentioning due to its ancient heritage. Established more than 2000 years ago, this location has been subjected to various wars and world events. The Tarragona Amphitheatre still remains after being constructed in the second century and offers an amazing view of the sea. Since it’s creation, it has served many purposes including as a prison for those working on the nearby port in the 1800s.

When deciding on taking a vacation, there are many hotels in Barcelona that have reasonable and affordable pricing. In many regards, the lodging is some of the less expensive in Europe and delivers quality accoutrements. Located on the coast of the Balearic Sea, Barcelona has been involved in some of the most intricate circumstances in history. Before visiting the beach at Avinguda del Litoral, explore the history of the rich culture that is Spain.