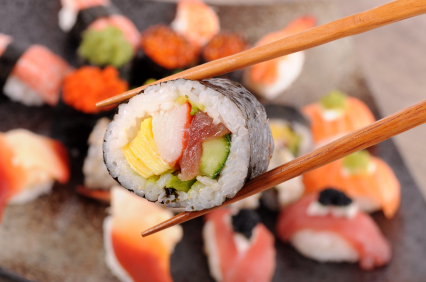 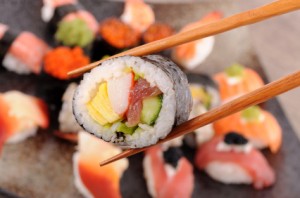 I swore I would never become that guy. You know, that douche who won’t eat something because it pales in comparison to the ‘real’ thing from its place of origin. I made a promise that I would sodomize myself with an old wooden spoon if I became that person because I didn’t want to live in that reality.

Well, lock the utensil drawer, because that day is now.

It started out so simple. Boy likes sushi. Boy eats boatloads of sushi to the disgust of his companions. Boy gets job in Tokyo. Boy discovers sushi kaiten (known in my circles as sushi-go-rounds). Boy gets call from ocean informing him they’ve run out of tuna. Boy returns home and revisits site of original sushi-glutton-fest. Boy becomes douche.

Somewhere around step three I realized I was screwed, but even still, some naïve part of me wanted to believe I would not utter those six snobby words:

Looking back on it, I couldn’t help it. I mean seriously, even the worst sushi I had in Tokyo was still better than anything else. My home is landlocked, whereas Tokyo is seaside – you figure it out. Sure, they try to make up for it by putting western spins on the Asian classic, including crispy spicy rolls and rolls stuffed with savoury sauces, but they just can’t compete. Even after eating it for a few years, the Tokyo memory still haunts me, teases me even, having melded into my mind into some mythical, unattainable symphony arranged by a fishmonger and then composed by some samurai looking guy. Bastardu!

It doesn’t stop there either, as I feel that way about pad thai, tom yum soup and gelato. Are these places out to screw me? I can’t live in all of them and I’m too poor to fly there every time I get a craving. I feel like walking into every restaurant that ‘serves’ that ‘food’ and tell them to stop wasting everybody’s time and just open a spaghetti restaurant – it’s nigh impossible to mess that up – so they’ll please stop raping my favourite foods.

I will admit though, the douchiness does wear off over time. After a few years and dozens of tear soaked pillows later, the desire for what truly made you happy does lessen. Now it’s more like you found your true love, lost it, then settled for a distant second that only ranks that high because you’re imagining your true love while you’re with them.

So the next time someone acts the snob regarding food, remember, they’re not trying to be blowhard show offs – they’re merely nursing a broken heart. Your sushi doesn’t blow, but rather they blow for letting it get away.

Oh, and your sushi does blow.