When it Comes to Honeymoons, Montego Bay is A-Okay

When I was looking for destinations to have a honeymoon to remember, Jamaica was always at the top of my list. From its easy going reputation to the raving reviews from friends and family who had been there regularly, it was hard to imagine anywhere else as even an option. Sure, anywhere in Polynesia was on there as a ‘dream’ destination but they just weren’t realistic, being too far away and a little out of our price range as non-trust fund newlyweds. Bora Bora would just have to wait until I was rollin in it later in life (or the next life).

Married in August, my wife and I had two options for a resort honeymoon – leave right after the wedding, as was tradition, or hold off on the honeymoon until the cold weather months. While we did like the idea of having a honeymoon later as a kind of winter escape vacation (we are Canadian after all!), you’re not really newlyweds if you put it off for a few months, and isn’t that kind of the point of a honeymoon? 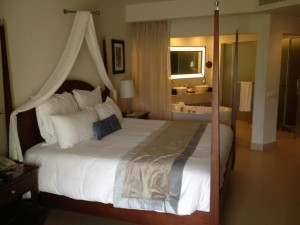 Such a great bed!

We opted to go right after the wedding and as was apparent by those on our flight from Toronto to Montego Bay, we weren’t the only ones who felt this way. Every couple we talked to got married on the same day and had the hallmarks of the recentness of it – the girls all had fake nails and the guys were fiddling with their wedding bands. Everyone was tired and everyone was looking forward to just having a good time in paradise.

And paradise it was.

Being put up at the Secrets Wild Orchid meant we were in one of Jamaica’s newest resorts and incredibly close to the airport, which was key for maximizing the good times as fast as possible. Others on our flight were heading to further away locales, and since it was during the summer and not the winter peak season, they had to transfer on a bus rather than fly direct (in the case of Negril, it was a few hours extra!). Instead, we had a 15 minute bus ride, quick check in, welcome champagne and amazing room that I still wake up and wish I was in.

Another benefit to it not being peak season? Things were a bit more relaxed at the resort as there were fewer guests. What this meant was the dress code, which normally at resorts with a la carte dining options is strictly enforced, was overlooked and allowed for bums like myself to eat without dressing to the nines. It also meant getting a chair by the ocean didn’t require you to wake up at dawn and camp out all day and normal services like drink delivery on the beach was done for almost everyone. Plus, the jerk chicken man was always on hand and there was never a line – how could you beat that? 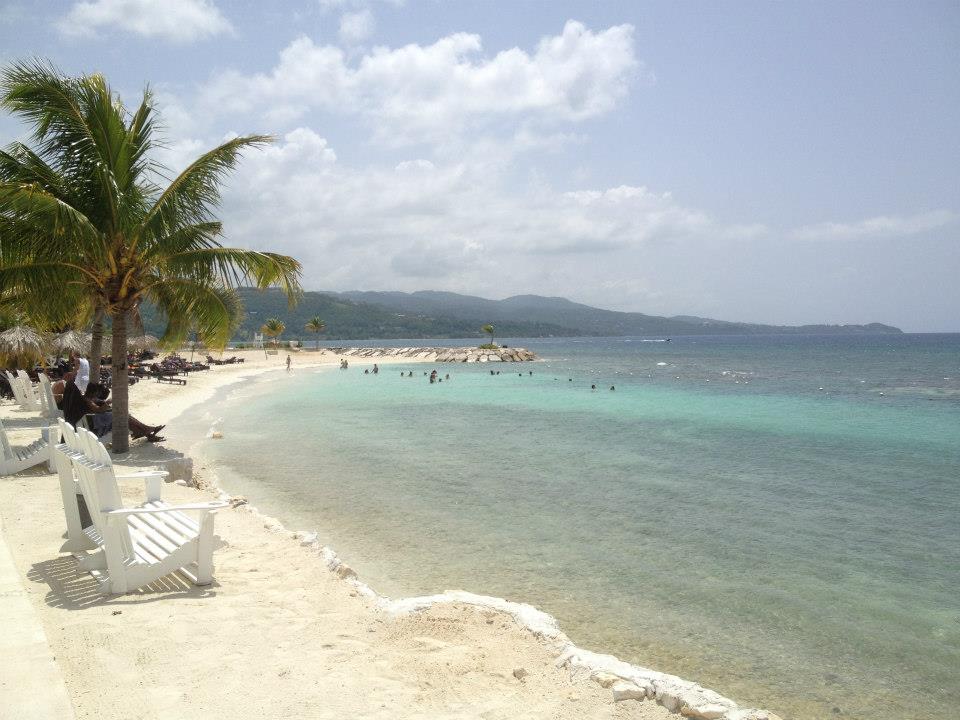 Such a gorgeous beach and it was never full. Off season rocks.

Because we went with Air Canada Vacations for our holiday, we got to meet with a representative from the company that provided us with a list of excursions available to us at a reduced rate. Some were pretty good deals, such as going out on the catamaran or waterfall hikes, but with only six full days of relaxation to be had, we wanted to make the most of enjoying the resort. 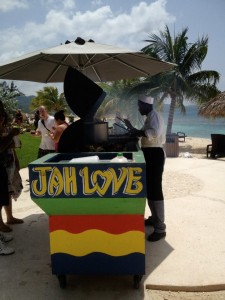 One day I will have my own jerk chicken man…

The only issue we had with the holiday came at the very beginning of the trip, which was delayed almost six hours without a reason being given. Arriving at the airport at 7 am for a 9 am departure, we didn’t actually leave the terminal in Toronto until well after 3 pm, effectively cancelling one day of our honeymoon. We inquired a few times as to the reason for the delay and no reason was given – I understand it’s an unpleasant part of the job to have to be the bearer of bad news when it’s something out of your control and you might not even know the answer to, but it doesn’t help the situation to be impatient to your already frustrated guests. We were given about $20 to use to get food while waiting, and offered a slight discount off our next holiday with Air Canada Vacations, which was a nice gesture that we appreciated, but I couldn’t help but feel if it had been handled differently at the outset, less discontent and animosity towards the flight attendants would’ve occurred.

With all this in mind, we had a great time on our honeymoon in Montego Bay and would recommend every aspect of our trip to others looking to do something similar. It’s exactly what you need after hectic months of planning and a memorable but stressful wedding day. While I’m not much of a lay on the beach and do nothing kind of guy when it comes to travelling, a change of pace is nice and it was perfect for a honeymoon.

And don’t forget the jerk chicken. Oh man do I miss that…