Around the World * Cusco, Peru: Dancing on the Bar Ends in a Trip to the Hospital

I was still very ill as I made my way to Cusco, I couldn’t even keep a piece of bread down. Els and I met a couple other girls on the bus (another Dutchie named Els and Cara from England). We arrived at 7am and walked around town trying to find the perfect hostel, which did not help with the constant feeling of wanting to barf. Our final decision to stay at Pariwana was based on the mass amount of pillows in the common room. (Pillows = Awesome, if you were not aware of this). 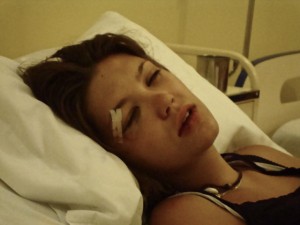 The first night the 3 girls went out and I stayed home sick, boooerns. I woke up around 7am and they were not home yet. This concerned me slightly, because I am usually the one that makes everyone stay out later. It turns out they got drunk and thought it was  good idea to dance on the bar. The new Els missed a step and fell face first into the floor. She was unconcious for about 20 seconds and had to be carried out of the packed bar to the hospital. For some reason the first hospital said they could not do anything for her? What? Thanks Cusco!

The second hospital did not have nylon and needles, the girls had to go to the Pharamacy and buy the materials for stitches. (Note to self: don’t hurt yourself in Cusco). Overall the new Els lived through the experience and came out with a half swollen face and a few stitches above her eye.

The new Els had a stalker in our hostel who continuously told us it was such a shame that she hurt herself because she was so beautiful. I don’t know if this meant he felt it was okay if ugly people hurt themselves???? I didn’t get a chance to ask him.

After all the adventure we decided we were going to rent a car and drive ourselves to go hike around some ruins since Machu Picchu was closed. We went around and compared all the prices the night before, but ended up getting up too late the next day and every rental car in the city had already been rented. Oooopps! 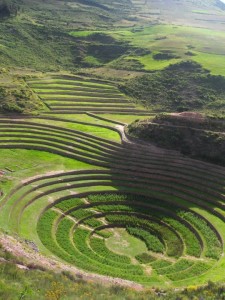 Not to worry! We took a local bus to Morah and hiked from there. I stopped to take too many pictures and lost the 2 other girls. I just kept along the path to the ruins and some people in a car pointed for me to turn right, so I started walking on the path going right. I was quite excited after the 9k uphill to be going down a very steep hill at this turn in the journey. By the time I got close to the bottom I realized 2 guys were running after me. Those jackass’s had sent me down the wrong path, I was heading to nowhere. Thus, back up the hill I went.

The next day both Els took off on other adventures, but Cara and stayed in Cusco. My stomach was feeling much better and around midnight we decided to have some drinks and go out. There may have been a bit too much tequila involved in the night, because we did absolutely nothing the next day other than shower and go out for a fancy, romantic dinner. Ginnie pig was attempted at this meal as well.

Also had my bank card stolen in Cusco. Another high point for me! The thief must have been super pro, I never leave my purse anywhere, always lock up everything and hold all things close to my chest in the streets. I have no idea when or how it was stolen either. Oh well, s%$# happens and thank god for Visa!